Visit the amazing swimming pigs or spend some time shelling or just relaxing on the secluded sand dollar sandbank which magically appears during very low tide. You can enjoy lunch at Spanish Well’s favorite sandbar grill, get up close with sea turtles, snorkel some of our most beautiful, colorful shallow-water reefs, or visit egg island shipwreck full of fish and underwater sea life. You can spend the day deep-sea fishing and fight against the season’s fresh catch, which includes tuna, mahi-mahi, and wahoo, and if you’re lucky, you might reel in a sailfish or marlin.

Pack your bags and ride with us In our bus to visit some of Eleuthera’s oldest heritage sites! from the North Eleuthera Area preacher cave to the Sapphire blue hole, glass window bridge and queens bath. You can also stop for lunch. 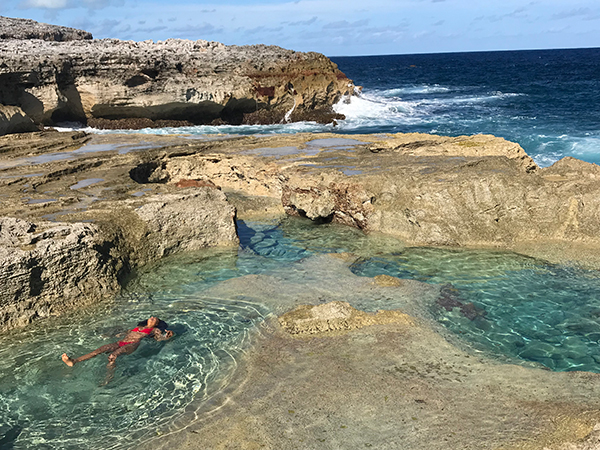 Queen’s Bath
The Queen’s Bath, or the Hot Tubs, is located 0.6 miles south of the Glass-window Bridge on the rugged Atlantic side of the island. These natural pools (carved by centuries of waves pounding the rock) are filled with dramatic crashing waves, shells and small sea life that wash over from the Atlantic Ocean. Once settled, this crystal clear water is warmed by the sun, creating a bath like temperature tidal pool that’s perfect for soaking. The best time to visit the hot tubs is at the low or medium tide. When visiting, it is better to wear water or tennis shoes. 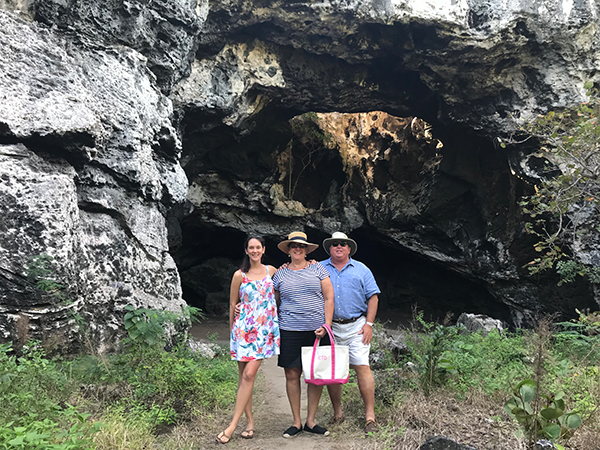 Preacher’s Cave
This large unique cave is located about two miles east of Gene’s Bay. It was discovered by William Sayle and, a group of Christians seeking religious freedom from Bermuda now referred to as “The Eleutheran Adventurers.” They were shipwrecked off the Eleuthera coast on a reef called the Devil’s Backbone and took refuge here after coming ashore in the early 1600’s. They shaped an altar from a large boulder at the far end of the cave, which remarkably still stands, and conducted the island’s first religious service there, earning the cave its name. The site is used by visitors and locals for picnics and other social outings because of the lovely white sandy beach nearby.

Glass Window Bridge
Glass Window Bridge is one of Eleuthera’s more popular attractions. Many times referred to as the “narrowest place on Earth”, the bridge is located just North of Gregory Town on the Northern end of Eleuthera Island. The man-made bridge took the place of a naturally formed bridge of rock that was destroyed in a hurricane. From the bridge, you can see a phenomenal contrast between the dark blue Atlantic Ocean churning away and the calm turquoise waters of The Bahama Bank. The colors are truly amazing. 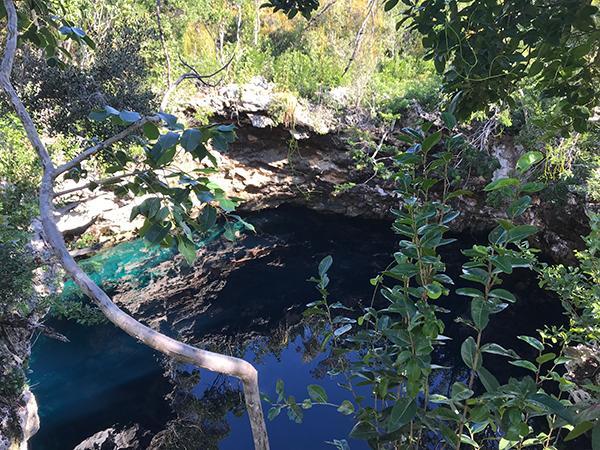 Sapphire Blue Hole
This blue hole is located just minutes away from Preacher’s Cave on the northern part of Eleuthera. People come from all over to jump and swim in this inland freshwater blue hole.
Book Now